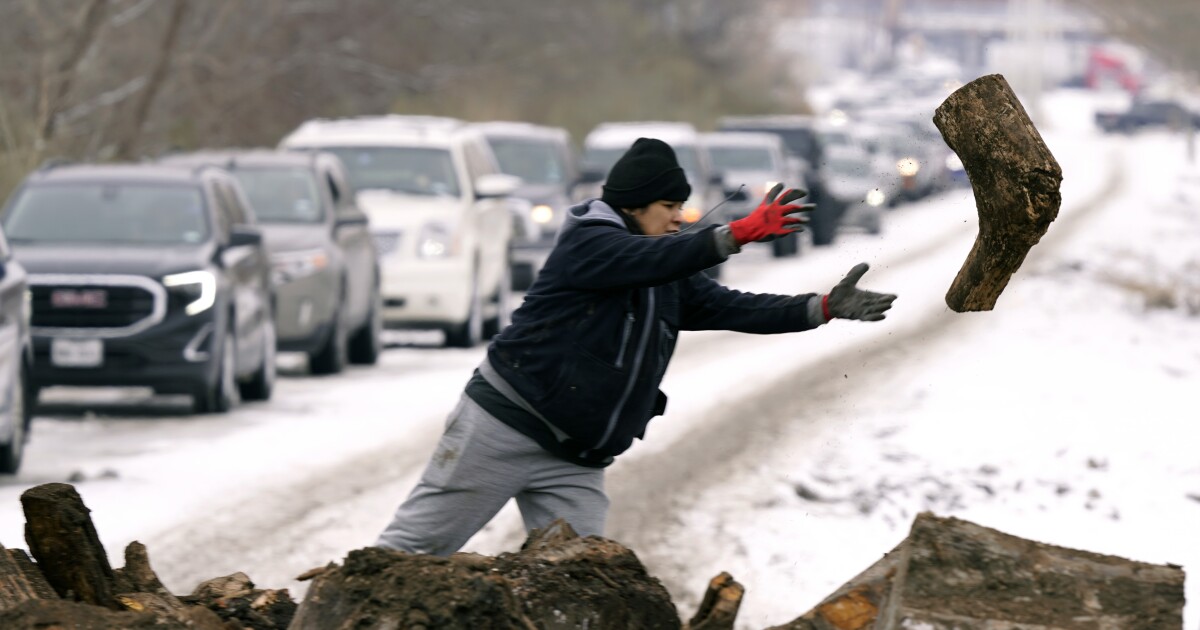 After losing power and heat Monday, Jennifer Grigas and her husband had to decide whether to risk COVID-19 exposure by taking their sons, ages 8 months and 3 years, to stay with her nearby parents, who have a gas-powered generator.

“You’re just so cold, that’s kind of what’s taking priority,” said Grigas, 33, a stay-at-home mom whose husband works for the Houston Astros baseball team. “I don’t want the kids to get sick. Who knows when the pediatricians are going to open again? And half the time you don’t want to take them in because of COVID.”

In Texas cities, hundreds have been hospitalized with carbon monoxide poisoning, many of them children, after trying to keep warm with poorly ventilated fireplaces, grills or cars in garages. A fire that killed three young children and their grandmother in the Houston suburb of Sugar Land this week probably spread from the fireplace they were using to keep warm, authorities said. Two men were also found dead in the cold in Houston — one on a highway overpass, another on a median near downtown.

At least 20 storm-related deaths were reported across the country, from Kentucky to Louisiana, Missouri, North Carolina, Tennessee and Oregon. And a new storm was expected to hit many of the same areas still crippled by outages and shortages Wednesday.

“Power will not be restored fully, I would say, probably for another couple days,” Houston Mayor Sylvester Turner said at a Wednesday briefing after his own home lost power.

Republican Gov. Greg Abbott held a briefing with other emergency managers about the storm Wednesday after facing criticism as outages that the state’s 30 million residents were initially told would be temporary, “rolling” blackouts still plagued large swaths of some of America’s largest cities, including Houston, Austin, Dallas and San Antonio. Abbott, who has called for an investigation into the state’s primary power grid operator, said the White House had assisted with orders that will increase available power in Texas, although that won’t help those who already have burst pipes and damaged homes.

“We do expect a lot of people in Texas to have disaster claims,” Abbott said, noting that the National Guard had been deployed to assists with roads and warming centers.

More than 7 million people across Texas are being impacted by boil-water notices, and an additional 250,000 are in areas where they cannot access local water systems at all, according to Texas Commission on Environmental Quality Executive Director Toby Baker.

He said three factors stressed water systems to near breaking points: a lack of power to facilities, frozen and broken pipes, and a surge in usage from people dripping their faucets to prevent pipes from breaking.

“It is an ongoing issue, and this number is probably going to grow over the next day or two,” Baker said at the briefing with Abbott.

Dallas County’s chief executive, Clay Jenkins, blamed Abbott and other state leaders for not requiring the same level of power grid regulation and winterization as other states.

“In an effort to provide the lowest cost energy to large commercial users they failed to insure enough protection for residents in their homes,” Jenkins wrote on Twitter on Wednesday. “We need a system with the lowest prices that insures reliability in completely predictable situations like this. It happened around the Super Bowl in 2011 and it will happen again. We know extreme weather happens here and we know weather patterns are getting worse due to climate change.”

More than 3,500 cold, stunned sea turtles, including many endangered Kemp’s ridley turtles, had been rescued by volunteers from the beaches of South Padre Island during the storm and brought to a makeshift shelter at the local convention center, which had power restored Wednesday.

“We’ve had boat captains bringing them in, passersby, a team from Space X. Local businesses in the Rio Grande Valley have taken time off. A lot of these volunteers don’t have water or power at home. yet they’re out here volunteering to save these animals,” said Ed Caum, director of the South Padre Island Convention and Visitors Bureau, who expects the turtles to stay until at least the weekend due to the latest storm. “We’ve got 200-year-old turtles in my building. Its’ pretty humbling.”

Wednesday’s storm triggered winter weather advisories for more than 100 million people in Texas and across the southern Plains, the National Weather Service said. It was forecast to bring snow and ice to east Texas, Arkansas and the Lower Mississippi Valley before moving to the northeast on Thursday, where winter storm watches were in effect from Baltimore to Boston.

Utilities from Minnesota to Texas and Mississippi continued rolling blackouts Wednesday to ease the burden on power grids that strained to meet demand as temperatures plunged to record lows. Nearly 3 million customers remained without power in Texas, Louisiana and Mississippi, plus 200,000 more in four Appalachian states, and nearly that many in the Pacific Northwest, according to poweroutage.us.

For Grigas, just driving to her parents’ house a mile away in central Houston was a harrowing trip through the storm-paralyzed city. Highways were coated with ice, and widespread power outages knocked out traffic lights and eventually municipal water systems.

Soon after Grigas and her family arrived safely and squeezed into the three-bedroom home with her parents and her sister’s family of six, the shortages started. Nearby grocery stores closed. They had trouble finding water even before Houston and other nearby cities issued boil-water notices Wednesday. Lines formed at gas stations, which didn’t have fuel or lacked the power to pump it.

“They’re either rationing it or there’s a hundred cars in line,” Grigas said Wednesday as freezing rain blanketed the city. “It’s been tough.”

Mark LeClair awoke early Wednesday to find his suburban Houston home had power for the first time in days. He quickly charged devices, turned on a heat lamp for his 13-year-old son’s gecko, which sprang back to life from hibernation, and made breakfast for his family in the microwave — his ovens were ruined when a pipe burst due to the storm. Two hours later, LeClair, 43, a software manager, lost power again.

Local grocery stores, gas stations and takeout restaurants all have long lines, he said. LeClair had his son stay with friends who have power, bought firewood from a man roaming the neighborhood and planned to hunker down at home

“We don’t really have much choice,” he said.

Vice President Kamala Harris addressed those who had lost power during a live interview Wednesday on NBC’s “Today.”

“I know they can’t see us right now because they’re without electricity, but the president and I are thinking of them and really hope that we can do everything that is possible through the signing of the emergency orders to get federal relief to support them,” Harris said.

“How this got so out of hand — we’re going to have to dissect that,” said Dr. Peter Hotez, dean of Baylor College of Medicine’s National School of Tropical Medicine, whose Houston home lost power and water Tuesday.

From his office at Texas Medical Center, which still had power Wednesday, Hotez said the storm’s impact on the pandemic “may even out.”

“Restaurants are closed and stores are closed, so you won’t have people interacting,” he said, which could limit the virus’ spread. “On the other hand, if people are sheltering in place with people they haven’t been with before, that’s added risks.”

Thousands of flights were canceled across regions hit by the storm this week, and many school systems canceled face-to-face classes. Water utilities in Tennessee, Oklahoma, Texas and other states were asking residents to restrict their usage due to water main breaks, low pressure and busted pipes.

The Austin Fire Department has been dealing with hundreds of broken water pipe calls since Monday. On Tuesday alone, the department received 685 calls about ruptured pipes.

“We are only able to respond to a fraction of these calls,” the department said on Twitter.

Utilities were still imposing rolling blackouts in Arkansas, Louisiana, Mississippi, Oklahoma and southeast Texas on Wednesday. The Southwest Power Pool, a group of utilities covering 14 states, said the blackouts were “a last resort to preserve the reliability of the electric system as a whole.”

The worst outages by far have been in Texas, where 2.7 million households were still without power Wednesday, according to the grid manager, the Electric Reliability Council of Texas.

Texas officials requested 60 generators from the Federal Emergency Management Agency that they planned to prioritize for hospitals and nursing homes. The state opened 35 shelters to more than 1,000 people, but some had already been forced to close Wednesday after losing power.

For many, the storm compounded not only health risks brought on by the pandemic, but also economic hardships.

Rickey Lyn Lewis, 57, was evicted from his Houston apartment last month after he was injured unloading trucks and unable to find work or amass enough unemployment assistance to pay the rent he owed.

At the start of the storm, he went to stay with a friend who lost power. The pair moved to stay with two other friends, careful to wear masks and keep their distance for fear of coronavirus infection. But when that apartment lost power overnight, Lewis was forced to return to the unheated apartment Wednesday where he had saved a case of drinking water, which no local stores had stocked.

Lewis said he was encouraged to hear temperatures were expected to rise above freezing by the weekend: “I can’t stand too much more cold weather.”

Brain disease transmitted by tick bites may be treatable

Does Trump Face Legal Jeopardy for His Incendiary Speech Before the Riot?

The Mobile Games Played By The Game Informer Staff