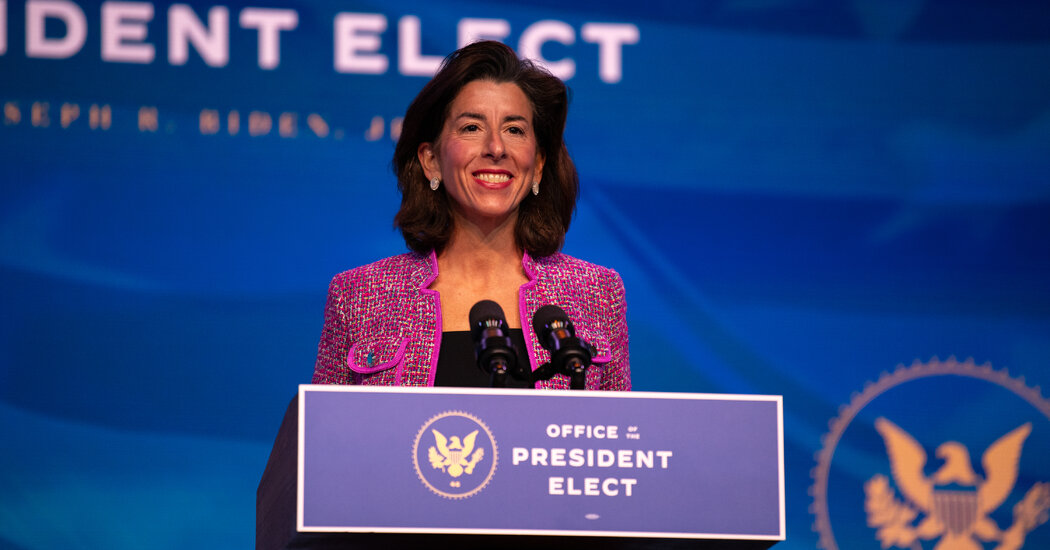 The Commerce Department has wide-ranging authority over issues as broad as technology exports and climate change. On Tuesday, President Biden’s nominee to run the agency, Gina M. Raimondo, will appear before the Senate commerce committee for a confirmation hearing. Ms. Raimondo, the current governor of Rhode Island, is a moderate Democrat and former venture capitalist.

Here are a few things to watch for as the hearing begins at 10 a.m.

Senators of both parties are likely to question Ms. Raimondo on how she plans to use the Commerce Department’s powers to counter China’s growing mastery of cutting-edge and sensitive technologies, like advanced telecommunications and artificial intelligence.

The Trump administration made heavy use of the department’s authorities to crack down on Chinese technology firms, turning often to the so-called entity list, which allows the United States to block companies from selling American products and technology to certain foreign firms without first obtaining a license. Dozens of companies have been added to the Commerce Department’s list, including telecom giants like Huawei and ZTE.

The Commerce Department was also given responsibility for outlining President Donald J. Trump’s U.S. ban on the Chinese-owned social media apps TikTok and WeChat — actions that were subsequently halted by a court order. Mr. Biden has said he sees TikTok’s access to American data as a “matter of genuine concern,” but it’s unclear how the new administration will address these issues.

But the Commerce Department has other capabilities that some tech experts say were underused in the Trump administration, like the role it plays in setting global technology standards that private firms must operated under.

As commerce secretary, Ms. Raimondo would wield authorities that could help struggling businesses and advance the Biden administration’s goals of building up domestic industry and revitalizing American research and development. That includes economic development programs and manufacturing partnerships that the Commerce Department offers to small and midsize enterprises, as well as its core mission of promoting American exports.

Delving into Ms. Raimondo’s past

Like some of Mr. Biden’s other nominees, Ms. Raimondo has faced a bit of backlash from progressive Democrats, who have criticized her close ties with venture capital and big tech firms. Before running for political office, Ms. Raimondo was a founding employee at the investment firm Village Ventures, which was backed by Bain Capital, and co-founded her own venture capital firm, Point Judith Capital.

Some progressives have also condemned certain actions she took as governor of Rhode Island, including clashing with unions during an overhaul of the state’s pension plans and extending some liability protections to nursing homes and health care facilities during the pandemic. But Democrats, who will support Ms. Raimondo’s speedy confirmation, are unlikely to press too hard on these issues, if at all.

Ms. Raimondo’s financial disclosure forms, released this month, also appear uncontroversial, showing an annual salary of $150,245 from the state of Rhode Island and $2.9 million to $7.5 million in cash, investment accounts and other assets, mainly mutual funds.

Afterparty, From The Studio That Made Oxenfree, Gets Physical Switch Release

Biden news: Trump says Meghan ‘no good’ after interview, as North Korea silent on US approaches

PS5 restocked at Amazon US prompting surprise and sadness

Mitochondrial mutation increases the risk of diabetes in Japanese men