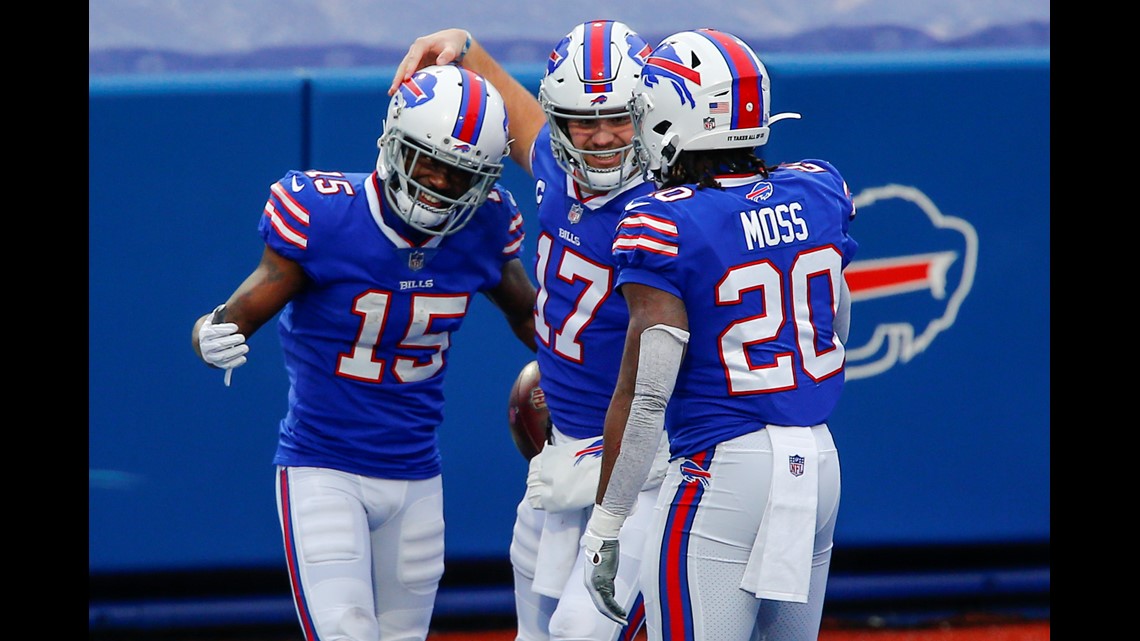 ORCHARD PARK, N.Y. — Bills quarterback Josh Allen will have his full arsenal of receivers, with Stefon Diggs and Cole Beasley both being listed as active after dealing with injuries this week.

– The Bills go three and out, and the Colts start their next drive at their own 36. Two big passes from Philip Rivers to T.Y. Hilton and Michael Pittman, for 23 and 22 yards, respectively, helped lead the Colts to the red zone. The Bills hold them to a 30-yard Rodrigo Blankenship field goal. 3-0 Indianapolis. The Bills get the ball at their own 15.

– The Bills answer right away with Josh Allen going to tight end Dawson Knox for the three-yard touchdown pass. The eight-play, 85-yard drive got rolling with some big plays – Josh Allen starting things out with a 12-yard run on 2nd & 10. Allen then hit Stefon Diggs for a 37-yard pass into Indianapolis territory, and hit Gabriel Davis for a 16-yard pickup to the Colts 21. 7-3 Bills.

– The Bills go three and out, and the Colts start their ensuing drive at their own 35.

– The Colts cap off a nine-play, 65-yard drive with a Jonathan Taylor touchdown from a yard out. Indianapolis retakes the lead 10-7. At the Bills 42, Philip Rivers hit Michael Pittman for a 32-yard gain to the Bills 11, while Taylor accounted for 23 yards on the drive. Bills start their next drive on their own 6 after a penalty with 8:07 to go in the first half.

– The Bills go for three straight run plays, going three and out again. The Colts start out their next drive at their own and immediately get into Bills territory, with a 31-yard connection between Rivers and Pittman. The Bills defense stops Jonathan Taylor on 3rd and goal at the 1, with a three yard tackle for loss by Taron Johnson and Tre’Davious White. The Colts go for it on 4th and 4. Rivers goes to Pittman in the end zone, but Indianapolis comes up empty. Still 10-7 Colts with a 1:46 remaining in the half.

Massive turn of events as Indy turns it over on downs 4th and goal at the 4.

– The Bills get the ball back at their own 4, and Josh Allen goes to work, capping off a 10-play, 96-yard drive with a five-yard touchdown run. On first and 10 at the Colts 21, an Allen interception by Isaiah Rodgers was overturned. The Bills got back to work, with Allen picking up a first down on a quarterback draw for 16 yards. Then Allen scores the go-ahead touchdown with his legs, from five yards out, and the Bills take a 14-10 lead going into halftime, and will get the ball to start the second half.

– The Bills open the second half at their own 28, ending the nine-play, 44-yard drive with a 46-yard Tyler Bass field goal, to extend their lead to 17-10. Cole Beasley had two catches for 23 yards on the drive, with Allen going to Stefon Diggs for a 16-yard pickup.

– The Colts get the ball back at their 25 and eat up 7:33 of clock on a 14-play, 60-yard drive, ending in a missed 33-yard field goal by Blankenship. The Bills hold their 17-10 lead with 3:32 left in the third quarter. The Bills red zone defense keeps coming up big, with four Indianapolis trips resulting in ten points.

Missed FG. #Bills are a tough opponent.#Colts might be tougher on themselves in this game. @wgrz

– The Bills start their next drive at their own 23. Josh Allen goes deep to find Stefon Diggs streaking into the end zone for the 35-yard touchdown to end the nine-play, 77-yard drive. Zack Moss was carted off the field after during the possession. The Bills extend their lead to 24-10 with 14:10 to go.

– The Colts start their next drive at their own 25, and answer with a 9-yard touchdown pass from Philip Rivers to Zach Pascal. The Colts picked up big chunk running plays, with back to back 29 and 20 yard rushes from Nyheim Hines and Jonathan Taylor into Bills territory. After a Bills neutral zone infraction, the Colts go for two from the 1 yard line, and Matt Milano stops Jonathan Taylor. Bills hold onto a 24-16 lead with 11:32 to go. The Bills start their next drive at their own 25.

– Tyler Bass drills a 54-yard field goal to extend the Bills lead to 27-16 with 8:08 remaining, avoiding great field position for the Colts with an 8-point deficit with a miss. Allen continued to rely on Diggs and Beasley on the seven-play, 39-yard drive. The Colts get the ball at their own 24.

– The Colts move quickly, finishing up a five-play, 76-yard drive in 1:55, with Rivers going deep to tight end Jack Doyle for a 27-yard touchdown. Rivers hits Doyle again for the two-point conversion, to pull within three, 27-24.

– On 1st & 10 from the Colts 34, Josh Allen is sacked and loses the football, with Daryl Williams recovering it for the Bills, bringing up a 2nd and 33. After an incomplete pass, Cody Bojorquez punts it away to the Colts 14 on fourth down.

– The Colts get to their on 34 on 4th and 1, and Jonathan Taylor gets it with a three-yard run. On 4th and 10 from their own 37, Rivers hits Pascal for a 17-yard gain, which appeared to have possibly been fumbled away. The officials uphold the no-fumble call, and the Bills lose a timeout. The Colts, down to another 4th down after a one-yard catch by Pittman, then two incomplete passes. It ends with Rivers incomplete to Hilton. Bills win their first playoff game since 1995, with a 27-24 win over the Colts.

Wolves, dogs and dingoes, oh my

The world as it is, ENDY ZEMENIDES * | Kathimerini