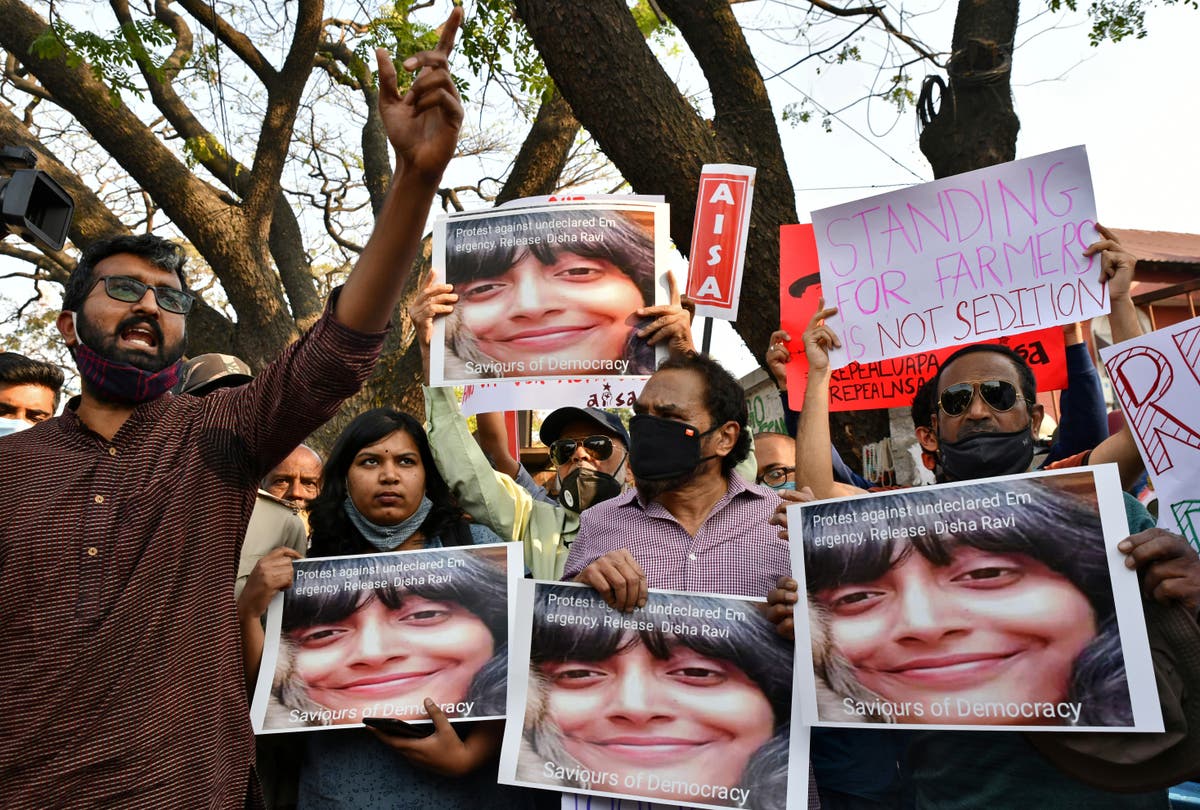 Disha Ravi, the 22-year-old Indian climate activist who was arrested at the weekend over her involvement in the country’s farmer protest movement, has appealed for the police to be prevented from leaking her private chat messages.

Ms Ravi, a co-founder of the India branch of Greta Thunberg’s Fridays for Future climate movement, has been arrested on charges of sedition and criminal conspiracy related to an online “toolkit” for protesters that she, Ms Thunberg and others shared on social media.

Since her arrest on Saturday, the activist has been vilified in sections of the Indian media and details of her private Whatsapp messages have been aired by a number of news outlets.

On Thursday, Ms Ravi appealed to the Delhi High Court seeking to restrain police from leaking any further private chats, uncovered as part of their investigation into her alleged involvement in creating the “toolkit”, which the authorities have claimed shows connections between a wing of the farmer protests and a banned Sikh separatist movement.

She also asked for appropriate action to be taken against TV channels and media houses that had included her private messages in their coverage.

Hearing the matter later on Thursday, the high court issued notices to channels including News 18 and Times Now as well as the News Broadcasting Standards Authority (NBSA) over the airing of the leaked information.

Ms Ravi’s attorney Akhil Sibal raised concerns over the reportage of the case in the media, saying that a “statement should be made that nothing [from the private messages] will be shared”. “Police appears to be the driving force of this infraction. It is not a barren area anymore,” he added.

On 16 February, India Today claimed that it had accessed Whatsapp chats between Ms Thunberg and Ms Ravi in which the latter shared an updated version of the toolkit with the Swedish activist. In the alleged chats, Ms Ravi talked about her fears of facing legal action.

Solicitor general Tushar Mehta, who appeared on behalf of the police, said there was no leak by the authorities.

The judge concluded the hearing by saying Ms Ravi’s petition was “something that requires consideration” and listed the matter for a further hearing on Friday.

But the Delhi Police opened an investigation into the toolkit after it found an organisation mentioned in it that has ties to the “Khalistani” movement for the creation of an independent Sikh nation.

Ms Thunberg deleted the tweet shortly after, and shared a new version later.

Two other climate activists, Nikita Jacob and Shantanu Muluk, were also wanted by police in relation to the case, but have managed to secure bail orders from the courts blocking their arrest.

The controversy over the toolkit erupted after international celebrities including Ms Thunberg, the singer Rihanna and the US vice president’s niece Meena Harris posted messages online drawing attention to the Indian farmer protests, which have been going on since three controversial laws were passed in September.

Some farmer unions have been opposing the laws as they fear the reforms will leave them beholden to corporate giants and threaten the state-guaranteed minimum price that they currently receive for their goods. The government says the reforms of the agricultural sector are long overdue and will benefit farmers in the long run, allowing them to sell their produce to customers anywhere in India and removing middle men from the distribution process.

Australia will not be intimidated by Facebook ‘unfriending’ it, says Scott Morrison

Jim Acosta surrounded and harassed on air while reporting from CPAC

Fact-Checking Claims on the Migrant Surge at the U.S.-Mexico Border

Scientists may finally be able to solve one of the universe’s deepest questions: how fast is it expanding?