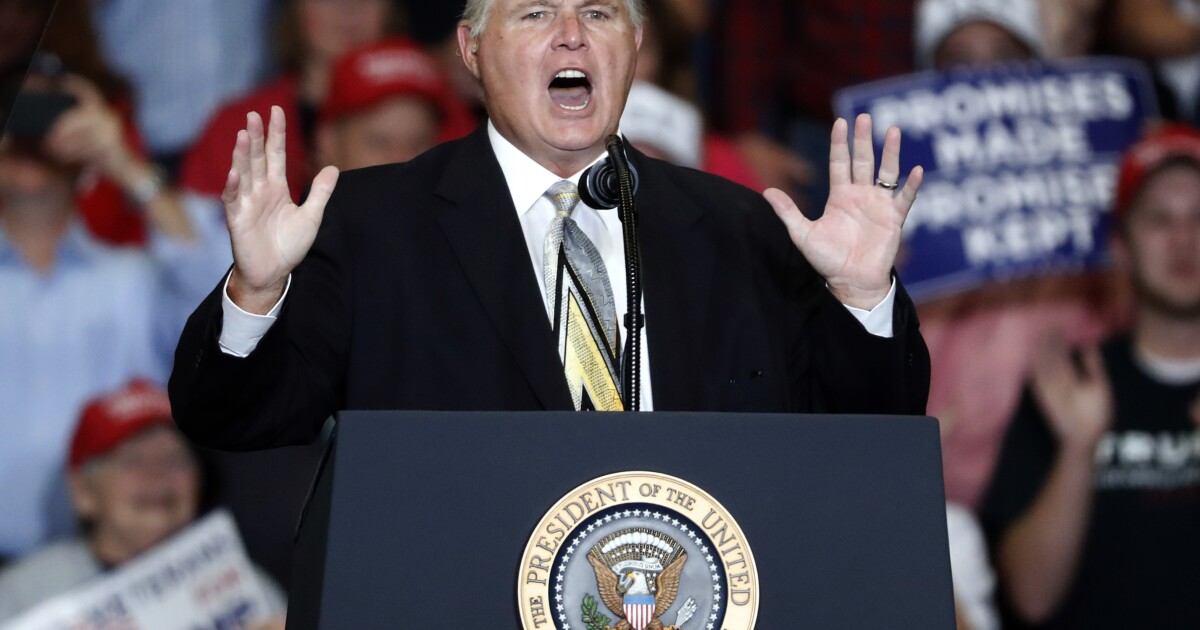 The death of talk-radio icon Rush Limbaugh was destined to produce radically polarized reactions on social media. And that’s exactly what happened Wednesday.

Conservatives reacted solemnly to Limbaugh’s death after the longtime voice of the right succumbed to lung cancer at age 70. Meanwhile, many of those who were appalled by the radio host’s long history of inflammatory rhetoric were unabashed in their hatred of the veteran broadcaster.

Trump awarded the Presidential Medal of Freedom to Limbaugh last year, which former California Congresswoman Katie Hill noted in her reaction to the radio host’s death.

“So is Rush Limbaugh going to go down in history as the worst person to ever receive the presidential medal of freedom or is there someone else?” Hill tweeted.

Trump’s sentiments, however, were echoed by Republican politicians, operatives and commentators on Twitter.

Sen. Ted Cruz of Texas called Limbaugh a “tireless voice for freedom and the conservative movement” and said he was praying for Limbaugh’s family. Kellyanne Conway said he was “an architect of the center-right movement” who “gave voice to millions of pro-freedom Americans.”

Rest in peace to the tireless voice for freedom and the conservative movement Rush Limbaugh.

“For more than 30 years no one did more to educate, inform, inspire, and just plain entertain Americans about the issues of the day than Rush Limbaugh,” former Vice President Mike Pence said in a Twitter thread.

Among Limbaugh’s critics, Bishop Talbert W. Swan II, president of a Massachusetts branch of the NAACP, shared his thoughts in a reply to former Secretary of State Mike Pompeo’s tweet eulogizing Limbaugh.

Rush Limbaugh was a despicable racist. He was a vile, repugnant, white supremacist who denigrated Black people, mocked those dying of AIDS and other diseases, and stoked the flames of bigotry and hatred. Our country has lost one of its most wicked voices. Praise God. https://t.co/VhOMusmTKF

“Rush Limbaugh was a despicable racist. He was a vile, repugnant, white supremacist who denigrated Black people, mocked those dying of AIDS and other diseases, and stoked the flames of bigotry and hatred,” Swan said. “Our country has lost one of its most wicked voices. Praise God.”

Others revisited some of Limbaugh’s widely denounced previous remarks, including his suggestion that actor Michael J. Fox was “faking” his Parkinson’s disease — for which the radio host later apologized, as advertisers fled — and his insults about Chelsea Clinton’s appearance when she was a young teen in the White House.

The progressive Young Turks podcaster Cenk Uygur added his two cents, tweeting, “Rush Limbaugh was a terrible person while he was alive. He made a living by attacking the powerless. His death does not in anyway change or redeem that.”

The idea that you say artifically nice things about people after they die is weird. I’ve never understood the logic of it. Rush Limbaugh was a terrible person while he was alive. He made a living by attacking the powerless. His death does not in anyway change or redeem that.

Read on for more divided reactions to Limbaugh’s death.

Rush Limbaugh was a generational media trailblazer. He gave a voice to millions of conservative Americans whom the mainstream media had not even tried to represent. His impact is impossible to overstate. May he rest in peace.

Chelsea Clinton was 13 years-old when Rush Limbaugh aired this “joke” about her on his television program. Imagine being 13, with all the anxiety of that age, and this airs on national television. pic.twitter.com/Ha4XmsCUTl

Sympathy to his family. RIP🙏🏻 pic.twitter.com/vAmHwJ8Oco

RIP to a legend and a patriot, Rush Limbaugh. Not many people can say they revolutionized and stayed at the top of an industry the way he did. My condolences to his family.

If you feel bad about Rush Limbaugh passing away, you are a bad person.

RIP Rush Limbaugh, the creator of talk radio and by extension the alternative media, an indispensable and iconic conservative voice.

Rush was a thought leader and passionate advocate who could throw a punch and take one too.

I had the pleasure of getting to know him personally on the golf course and cherish my time with him.

The legacy of Rush Limbaugh is clear: the most successful radio broadcaster in history. Mr. Limbaugh provided a conservative balance against the dangerous left wing corporate media machine.

Heartbroken about #RushLimbaugh. He is an American icon that can never be replaced. Let the life he led serve as a reminder to us all to fight nonstop for truth.

We face dark times in this country, but we can all be a light if we have the courage to speak up, unapologetically.

Rush Limbaugh carried the torch of conservatism and enlightened millions through his radio show – sharing the truth on conservative principles from President Reagan to President Trump.

May we continue to keep Rush’s family and friends in our prayers – rest in peace, Rush. pic.twitter.com/4kDoyO3Zh2

3/3 He has built a legacy that will endure for many generations to come and will continue to inform our country.

Thank you, Rush, for all you have done for this nation. The United States of America is better because of you.

“Feminism was established to allow unattractive women access to the mainstream of society.”

“[Beyonce’s] married to a rich guy. She now understands it’s worth it to bow down.”

[To Black female caller]: “Take that bone out of your nose & call me back.”

Rush Limbaugh was an icon, patriot, and American hero.

No one fought harder for freedom and liberty.

The greatest radio host of all-time will be missed by millions. God bless his family.

So is Rush Limbaugh going to go down in history as the worst person to ever receive the presidential medal of freedom or is there someone else?

We’re giving Rush Limbaugh all of the compassion that he offered women, people of color, the sick, the poor, and the LGBTQ community. https://t.co/fNOhFSIhpc

I don’t remember “rest in piss” trending in response to any prominent liberal’s death. Celebrating death is a left wing thing. On the Right, it is the exception. On the Left, the rule. They are a death cult. And they truly want you to die if you disagree with them. They really do

Pretty sure the last thing Rush Limbaugh would have wanted, is for you to be offended at liberals celebrating his death. They hated him because they feared him. Let them show who they really are.

Animal Crossing: New Horizons Has Mario-Themed Items On The Way

The Battle Lines Are Forming in Biden’s Climate Push

The solar system’s mysterious ‘ninth planet’ may never have existed at all, scientists say

Search for axions from nearby star Betelgeuse comes up empty

General Motors to stop making diesel and gas vehicles by 2035