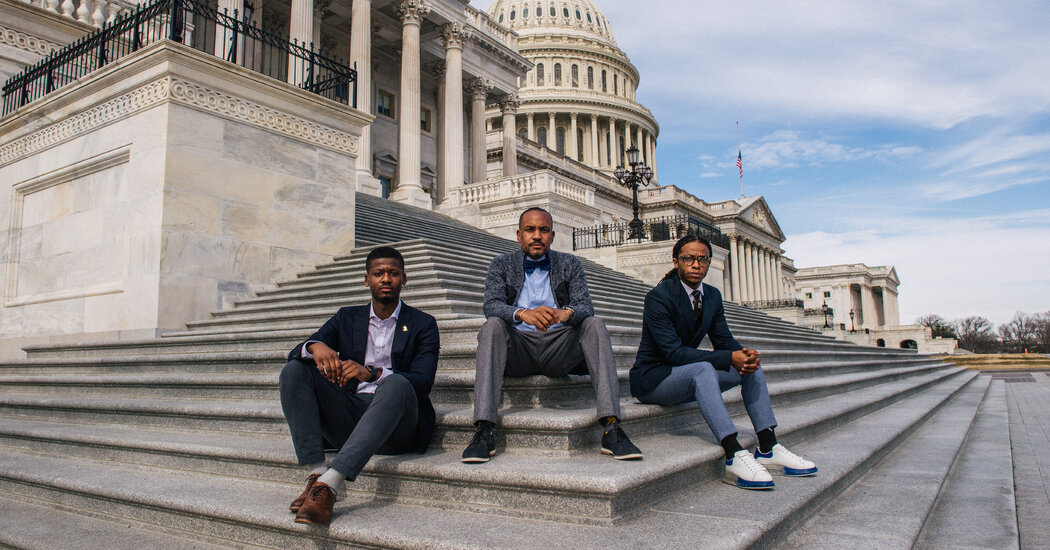 WASHINGTON — Jabir McKnight woke up on the morning of Jan. 6 with an uneasy feeling.

The day before had been great: He and another congressional staff member had celebrated Founders Day for their historically Black fraternity, Kappa Alpha Psi. But as Mr. McKnight walked that Wednesday to Capitol Hill, where he had always felt safe, images of white supremacist violence in Charleston, S.C., and Charlottesville, Va., began to race through his head.

Hours before the violent pro-Trump mob rampaged through the halls of Congress, leaving nearly 140 police officers injured and five people dead, Mr. McKnight recalled, he could not shake the sense that something very bad was about to happen.

“The writing was on the wall for this,” said Mr. McKnight, 23, who is the communications director for Representative Sheila Jackson Lee, Democrat of Texas.

He pointed to examples of right-wing violence in recent months and years. “For Black staffers, it’s a little bit different, because a lot of these attacks are directed toward our people,” he said. “We’ve seen these things happen over and over and over again. I don’t think we were blinded that people who are domestic terrorists would say, ‘Oh, it’s the Capitol, we’ll stop there.’”

Symbols of racism and white supremacy were on full display at the Capitol on Jan. 6. Rioters paraded the Confederate battle flag through the halls. One man wore a “Camp Auschwitz” sweatshirt, while others flew the flag of the fictional country Kekistan, which mimics a Nazi war flag.

Black Capitol Police officers have described the intense racism they endured from the mob; one told Buzzfeed News he was called a racist slur 15 times, causing him to break down in tears.

Only a small percentage of congressional aides are Black. Since the attack, Mr. McKnight and others who were in nearby offices in the Capitol complex that day have been talking among themselves about how close the violence came to them, what it means to experience such a virulent expression of racism in what is supposed to be a citadel of liberty, and the suspicion they now feel toward other aides, members of Congress and random people they encounter as they go about their business on Capitol Hill.

“It makes the trauma worse,” Mr. McKnight said. “Because as you’re walking around, you don’t know who could have been involved with what.”

For some Black staff members, the Capitol attack brought back memories of how they had tried to avoid people they felt could be prone to racist violence — only to find them at their place of work.

“This was the ugliest display of racism that I’ve seen ever. And I’m from the South,” says Remmington Belford, 30, the communications director for Representative Yvette D. Clarke, Democrat of New York. “There’s a specific demographic of people that you know conduct themselves that way, and you find your way away from them. Those people came to Capitol Hill. The people who believe in supremacy due to genetics were on Capitol Hill, and they were armed, and they were incensed.”

The staff members described feelings of fear about the physical threat and anger about the psychic damage done by the mob.

“I never though I’d see the Confederate flag walked through the halls of Congress,” said Mike McQuerry, 50, the communications director for Delegate Stacey Plaskett, Democrat of the Virgin Islands and an impeachment manager in the trial of former President Donald J. Trump. “As much as we think we’ve had progress, we haven’t progressed that much.”

Mr. McQuerry said that white rioters, using force and rage, gained access to parts of the Capitol that had always been off-limits to him, like Speaker Nancy Pelosi’s office or the floor of the Senate.

“Those insurgents got to places where we as staffers couldn’t go,” he said, “places we wouldn’t even think about going.”

Mr. McKnight, Mr. Belford and Mr. McQuerry watched the worst of the violence as they were fortified in their offices in the Rayburn Building on the House side of the Capitol complex.

“The fear was very present,” Mr. Belford said, adding that he had planned two escape routes, including rushing through a window. “As far as close? They were steps away. Let’s be very clear. There’s no force that protects us in Rayburn” once the rioters breached the Capitol.

“We were fortified in our offices,” Mr. McKnight said. “You don’t know what’s on the other side of the door. You never knew what was on the other side. We were worried about any sound we heard. Are they here? Are they in the building? The only time you would have known is when it was too late. Everyone was terrified.”

As they watched the mayhem that day, the aides said, they feared for their lives, realizing that not only lawmakers could be attacked but so could they.

After the siege, congressional aides have reported trouble sleeping and feeling anxious, claustrophobic, angry and depressed. Lawmakers have requested additional resources to support the mental health needs of employees in response to surging demand.

“It was the first time I realized that post-traumatic stress syndrome is a thing,” said Mr. Belford, who is from Houston. “We as staffers are still dealing with the trauma.”

Despite what they experienced that day, Mr. McQuerry, who is from Detroit, said staff members felt an obligation to push on with work.

“There’s not that many of us that work up here,” he said of Black aides to members of Congress. “It’s affected us tremendously. We have to just push through. I think we deal with it every day. PTSD is really real.”

During the riot, some Democratic lawmakers said they thought they might be able to blend in with Republican members of Congress to avoid the violence. Representative Dean Phillips, Democrat of Minnesota, said recently on the House floor that he recognized his privilege when this thought occurred to him.

“Within moments, I realized that blending in was not an option available to our colleagues color,” he said. “So I’m here tonight to say to my brothers and sisters in Congress, and all around our country: I’m sorry. I’m sorry. For I had never understood, really understood, what privilege really means.”

Aides who represent members of color said they were well aware that Black lawmakers could be targeted because “our members are some of the most vocal against Trump’s harmful and divisive practices,” Mr. Belford said. “The fear was very present. We cannot blend in. We cannot not be visible. Our skin color often becomes a target.”

They were reminded this week of the threats to lawmakers when a top security official suggested on Tuesday that members of Congress consider upgrading their home security systems to include panic buttons and key fobs. In a lengthy memo sent to House lawmakers and their aides, Timothy P. Blodgett, the acting sergeant-at-arms, reiterated measures that he advised lawmakers to take to protect their Washington and district offices as well as their homes.

The guidance — which encouraged refraining from posting about lawmakers’ appearances at events until after they have “safely left,” using special hoods to reduce exposure to “harmful materials” sent by mail and installing panic buttons in lawmakers’ homes — starkly illustrated the continuing shock waves after the Jan. 6 attack.

Lawmakers have received briefings on a handful of specific active threats to the Capitol and to members after the attack, and court documents have detailed plans by individuals in the pro-Trump mob to kill specific members of Congress.

One man threated to put “a bullet” in Ms. Pelosi’s head “on Live TV,”; another threatened to assassinate Representative Alexandria Ocasio-Cortez, Democrat of New York, that day, according to federal prosecutors.

Mr. McKnight, who is from Philadelphia, said he had spoken with colleagues who felt shocked after moving to Washington.

“So where can you go?” Mr. McKnight said. “You just moved to D.C. to work in politics and be in a safe environment, and now that’s changed.”

As traumatizing as the riot was, the staff members said they had also received an outpouring of support.

During the attack, Ms. Plaskett posted on Twitter a photograph of her staff, including Mr. McQuerry, telling the public they were safe. Mr. McQuerry said he received a flood of texts containing messages such as “I love you” and “be safe.”

Mr. McKnight said he was also inundated with support from friends, family and acquaintances.

“We could have lost our lives,” he said. “Not only were people watching, but people cared.”

A silver lining for extreme electronics