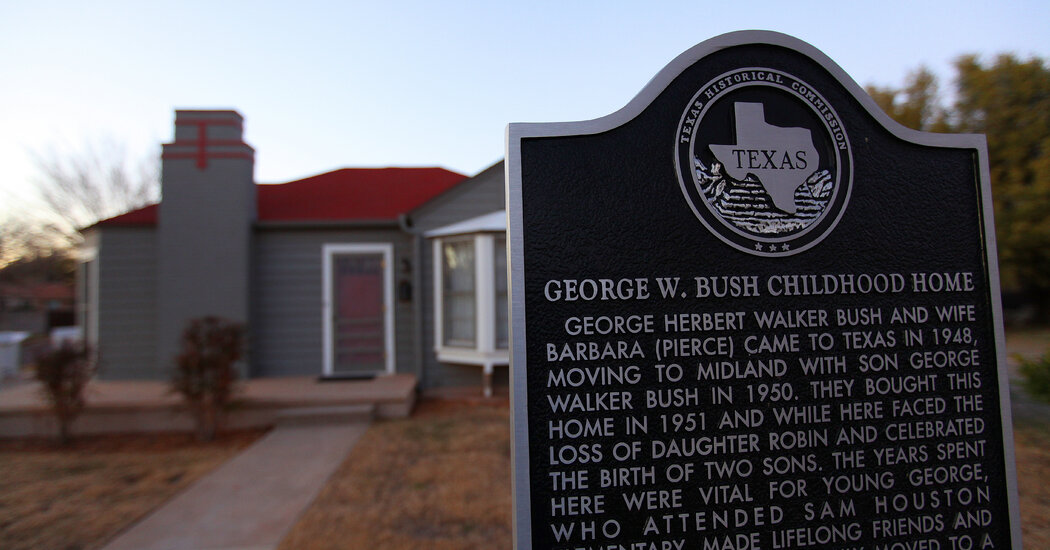 The 1,400-square-foot house in Midland, Texas, where former President George W. Bush spent part of his childhood is under consideration to become part of the national park system, the National Park Service said.

The service said it had started a “special resource study,” as directed by Congress in 2019, to examine the eligibility of the home on West Ohio Avenue “as a new unit of the national park system.”

The study will gather information about the house and the findings will be reported to Congress, according to the service.

The agency also said in an announcement last month that it would hold a virtual meeting for the public on Jan. 26 to learn more about Mr. Bush’s former home, which has already been turned into a museum.

The home’s precise designation in the park system was not immediately clear and a Park Service press representative could not be reached on Saturday.

“Adding the George W. Bush childhood home is a must for the National Park Service,” said Douglas Brinkley, a professor at Rice University in Houston and an author and presidential historian who has written about the Park Service’s preservation of homes of notable Americans.

Designations of the homes are meant to preserve the sites permanently for the public and to honor the local history around them, he said.

The home was part of not only Mr. Bush’s formative years but also his father’s, former President George H.W. Bush.

The consideration to add the site to the park system comes as some of George W. Bush’s former political rivals and critics have looked back with nostalgia at the more considered and civil tone that governed his presidency. The re-examination has occurred amid the division and violence sown by the current Republican president, Donald J. Trump.

“There is no doubt that George W. Bush’s reputation and, to a lesser extent, his father’s, have been greatly enhanced by Donald Trump,” said Jeffrey A. Engel, director of the Center for Presidential History at Southern Methodist University in Dallas.

“Were it about his policies alone, history is going to put him on the lowest rungs,” Mr. Engel said of the younger Mr. Bush. “But people still really wish they had a president — and are looking forward to having a president — who isn’t a jerk.”

The elder Mr. Bush had moved to Midland at the start of the oil boom to make his fortune in the industry.

He bought a bright blue house on East Maple Street for $7,500, with a mortgage from the Federal Housing Administration, wrote Herbert S. Parmet in his book “The Life of a Lone Star Yankee” about the elder Mr. Bush.

“Their area became known as Easter Egg Row because all the houses were painted with vivid colors,” he wrote.

The family then moved to the house on West Ohio Avenue that is under Park Service consideration and lived there from November 1951 until November 1955, and later moved on to Houston.

These were the years when the elder Mr. Bush was on the road, selling oil parts and leaving the children with their mother, Barbara. Her strong personality and famously sharp tongue would influence the swagger and blunt speech of the younger Mr. Bush.

“This is why he says he has his father’s eyes and his mother’s mouth,” Mr. Engel said.

After leaving the White House in 2009, Mr. Bush and the former first lady, Laura Bush, returned to Texas and in the years since have pushed for better treatment of wounded veterans and expanded school and community libraries, Mr. Brinkley said.

Both have largely stayed out of politics, but Mr. Bush, who did not support Mr. Trump’s candidacy, has spoken out against the bigotry and white supremacy that have been parts of the current president’s tenure.

On Wednesday, Mr. Bush condemned the siege on Capitol Hill, which he said “was undertaken by people whose passions have been inflamed by falsehoods and false hopes.”

Mr. Brinkley said of Mr. Bush: “He’s never going to be seen as a top-tier American president due to the failure of the Iraq war, the tanking of the economy under his watch, his inaction during Katrina. The list is long.”

But Mr. Bush’s consistent disavowal of Mr. Trump, he said, “puts him on the winning side of history.”

Inexpensive tin packs a big punch for the future of supercapacitors