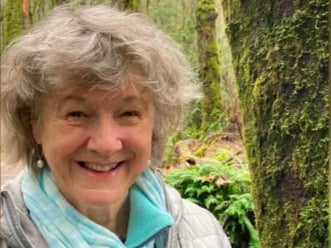 A woman who was “overjoyed” to be outside again after receiving the Covid-19 vaccine was killed when a driver in Portland ploughed into a group of people.

Jean Gerich, 77, was killed after Paul Rivas, 64, drove his vehicle into a group of people in Portland, according to KGW News.

The grandmother had just received her Covid-19 vaccine and was enjoying some return to normalcy when she was killed.

According to Ms Gerich’s family, she was a grandmother of five and a cancer survivor.

“Jean Gerich was not a nameless victim. She was a loving mother of two. She was a proud grandmother of five, ages four to 16. She would have turned 78 in 12 days. She beat cancer five years ago. She received her first vaccination shot last week and was overjoyed to get out in the world again,“ the family said.

Ms Gerich was hit once, and then Mr Rivas allegedly hit her again, and dragged her under the car.

The nine other victims of the attack were left with wounded, according to authorities.

Mr Rivas attempted to flee the scene on foot, but was cornered by bystanders and was eventually arrested by Portland police officers.

Tyler Meyers, one of the individuals who chased Mr Rivas, said told The Oregonian that he was throwing potted plants at people and trying to fight the bystanders who wanted to stop him.

“I told him, ‘I think you just killed a lady up the street,’” Meyer said, according to The Oregonian. “He laughed and said, ‘Ah, that’s too bad.’”

Mr Rivas has been charged with murder, assault and failure to perform the duties of a driver.

According to The Oregonian, Mr Rivas has a history of driving dangerously. Court records that show he got his licence reinstated in 2014 after being convicted three times for failing to obey traffic signals between 2007 and 2013.

Thus far no motive has been given to Mr Rivas’ alleged rampage. Authorities said they do not believe terrorism or political ideology motivated the attack.

A benchmark for single-electron circuits