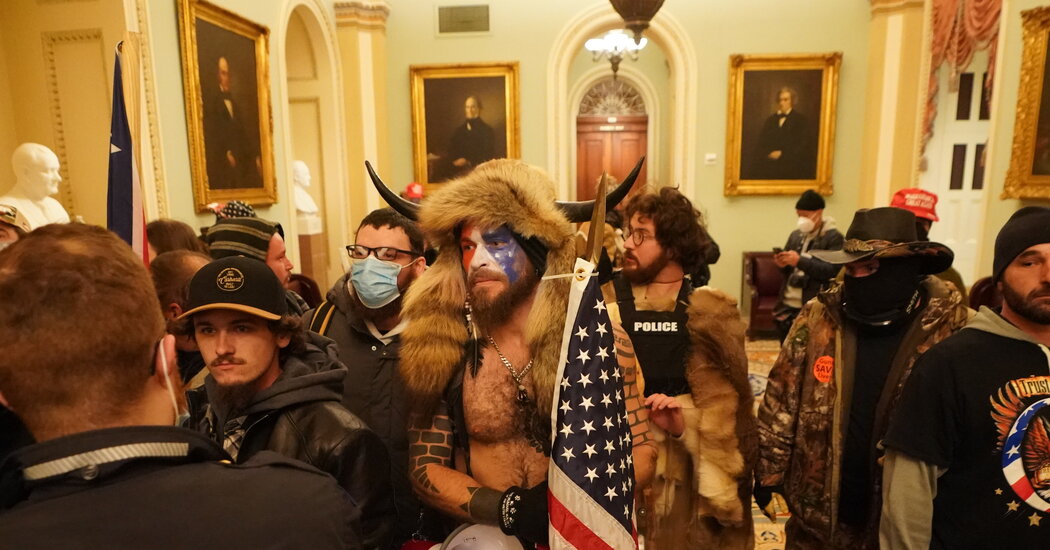 A man who was photographed carrying the lectern of Speaker Nancy Pelosi during the raid on the U.S. Capitol this week and another who roamed through the halls of Congress while wearing a horned fur headdress have been arrested and charged, the Justice Department said on Saturday.

Adam Johnson, 36, of Parrish, Fla., was arrested by U.S. Marshals on Friday night after a widely circulated photograph showed him sporting a wide smile as he waved to the camera with one hand and hauled off Ms. Pelosi’s lectern with the other. On his head he wore a Trump knit hat, with the number “45” on the front.

Jail booking records from the Pinellas County Sheriff’s Office provide scant details about the arrest of Mr. Johnson but show that he was arrested on a federal warrant. He was charged with one count of knowingly entering or remaining in any restricted building or grounds without lawful authority, one count of theft of government property, and one count of violent entry and disorderly conduct on Capitol grounds.

The office of Michael Sherwin, the top federal prosecutor in Washington, said on Saturday that it had also charged Jake Angeli, a well-known conspiracy theorist who was photographed in the Capitol on Wednesday.

Mr. Angeli entered the building shirtless, with his face painted red, white and blue, and wearing a fur headdress with horns. He also carried a spear, about six feet long, with an American flag affixed just below the blade, according to Mr. Sherwin’s office.

Nicknamed “Q Shaman” for his propagation of baseless QAnon conspiracy theories, Mr. Angeli was a fixture at pro-Trump rallies in Arizona after the 2016 election. He was arrested on Saturday.

Early Saturday morning, the F.B.I. arrested Doug Jensen, who was captured on a video taken by Igor Bobic of HuffPost that showed him pushing far into the Capitol, ignoring the warnings of a law enforcement officer.

Mr. Jensen is in custody in Polk County, Iowa, and is facing charges including obstructing a law enforcement officer during a civil disorder, according to a spokesman for the Polk County Sheriff’s Office.

The authorities also arrested Richard Barnett, 60, on Friday, the man pictured with his feet kicked up on a desk in Ms. Pelosi’s office during the Capitol siege. Mr. Barnett, who was arrested in Bentonville, Ark., will appear in federal court on Tuesday and will ultimately be extradited to Washington, D.C.

US Capitol attack: Police chief reveals one officer was killed – ‘it’s with a very heavy heart’

UK leading the way in use of language-learning apps

Here’s Why The Cover To F-Zero Is So Special