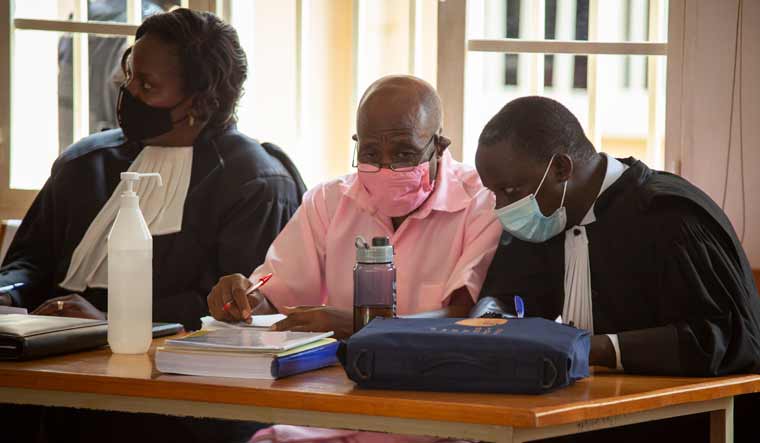 Paul Rusesabagina, whose portrayal in the 2004 film Hotel Rwanda earned an Oscar nomination, has been charged with nine terror-related offences in a Kigali court, after he was allegedly abducted while boarding a flight in Dubai and taken to Rwanda.

Rusesabagina, now a Belgian citizen holding a US Green Card, has been a vocal opponent of Rwandan President Paul Kagame. In September 2020, he was taken to Rwanda after boarding a private flight in Dubai—which he says he believed was going to Belgium but which landed in Rwanda—and placed under detention.

“He was kidnapped and taken by extraordinary rendition to Rwanda,” his daughter Carine Kanimba posted on Facebook.

His trial, which began in Kigali on Wednesday, has been decried by his family, who call it a sham and say that he is in poor health. The Rwandan government, however, accuses him of fomenting violence and directing attacks on its territory whilst in exile.

“We don’t expect a fair trial,” his daughter Carine Kanimba, told Reuters on Tuesday. “This hearing will be a theatre.”

Thierry Murangira, the spokesman for the Rwanda Investigation Bureau, told Reuters these allegations were false. “He has been arrested in accordance with the law…He was subject of an international arrest warrant.”

Kanimba has been tweeting the developments of the trial, claiming Rusesabagina’s lawyer’s audio was being cut off every time he made strong arguments.

Rusesabagina became an international figure after the 2004 film Hotel Rwanda, which depicted the events of the 1994 Rwandan genocide when the predominantly Hutu majority led an ethnic cleansing that left between 500,000 to over one million dead, mostly members of the Tutsi minority as well as some Hutu moderates. Rusesabagina, then proprietor of the Hotel des Mille Collines in Kigali, hosted over a thousand Tutsis and Hutus who were in danger of being killed by the military. He did so by bribing the Hutu-led government and militia, besides using his own influence to garner international attention to the hotel’s plight.

In 2005, US President George W Bush presented Rusessabagina with the Presidential Medal of Freedom.

Following his increased stature after the film’s release, Rusesabagina led a concerted campaign against President Kagame, who led the Rwandan Revolutionary Front (RPF) that ended the genocide. Since coming to power in 2000, he has remained the country’s leader after extending his constitutional term limits.

In 2018, Rusesabagina had called for armed revolt against the Kagame government in a YouTube video, Reuters reported. “The time has come for us to use any means possible to bring about change in Rwanda as all political means have been tried and failed,” he said. “Rwandan people can no longer stand the cruelty.”

As time has passed since the genocide, controversies have emerged over his role in protecting the hotel’s residents, with some alleging that he took payment for the service.

Hollywood finally has a replacement for the green screen