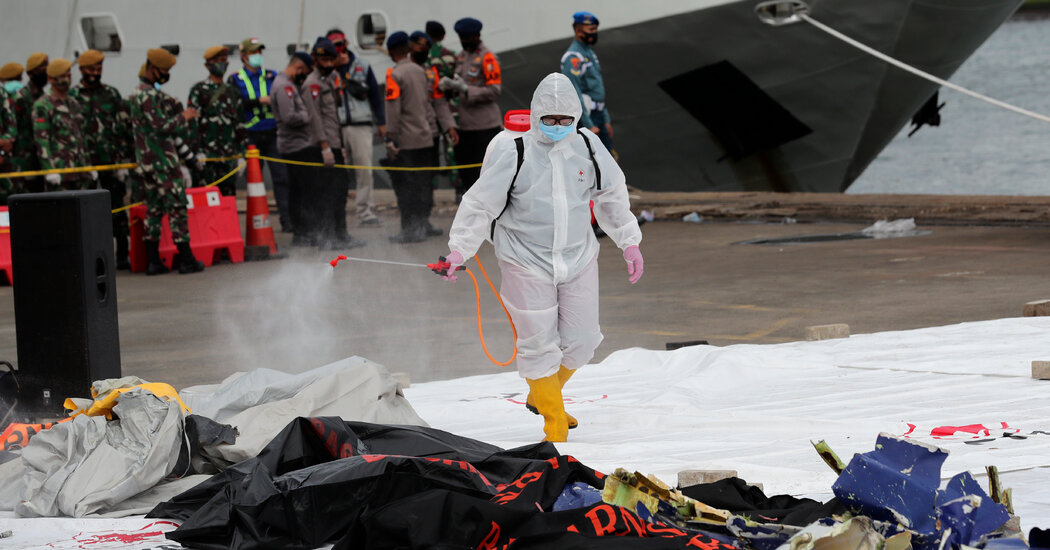 A former Indonesian Air Force pilot known for wearing a white Muslim prayer cap while flying, he filled his time with Sriwijaya flight simulator sessions meant to ensure that pilots completed the minimum flying hours to keep their licenses. He prayed and advised his colleagues to maintain their piety, too.

By Sunday afternoon, divers had retrieved items from the plane in waters northwest of the Indonesian capital, Jakarta: chunks of fuselage, airplane wheels and waterlogged children’s clothes. Ten children and babies had been aboard the flight, en route from Jakarta to the city of Pontianak on the island of Borneo, a roughly 90-minute journey.

The Indonesian authorities did not seem to expect survivors, a grim start to the year in a sprawling archipelago nation where barely a year goes by without a major airplane accident. As Indonesia’s aviation sector has expanded quickly, safety and operational standards have not kept pace, industry insiders said.

“I, on behalf of the government and all the people of Indonesia, would like to express my deep sorrow for this tragedy,” President Joko Widodo of Indonesia said on Sunday.

The cause of the crash, after the plane lost more than 10,000 feet in altitude within a minute, is not yet known.

Indonesian investigators say they have confirmed where the plane’s data recorders are in the watery crash site, an area known as the Thousand Islands, and they hope to recover the so-called black boxes soon. It may take months for investigators to piece together what terrible alchemy of weather, airplane maintenance and flight crew decision-making may have contributed to the fatal episode.

Nurcahyo Utomo, an investigator for Indonesia’s National Transportation Safety Committee, said that the relatively tight debris radius as seen in video footage suggested preliminarily that the plane may have broken apart when it hit the water, rather than exploding in midair.

But there is no question that Indonesia’s skies remain some of the world’s most dangerous, tainted by a history of poor safety regulations that has dogged domestic airlines for years. And the pandemic has complicated efforts aimed at restoring their reputations and finances.

Grounded by a collapse in passenger traffic from the coronavirus, pilots said that it was a struggle to maintain their professional edge, even if their carriers offered training on simulators. Sriwijaya has two flight simulators for older 737 models, pilots said.

Capt. Rama Noya, the chairman of the Indonesian Pilot Association who is also a pilot for Sriwijaya, said that when he flew after a month’s pause, he felt like he “was being plugged in again.”

The rusty feeling is not limited to pilots for Indonesian carriers.

“This is a concern for all countries at the moment,” said Gerry Soejatman, an Indonesian aviation expert.

For Indonesian airlines operating with razor-thin profit margins, the decline in passenger traffic during the pandemic is particularly precipitous. Sriwijaya Air, founded in 2003 during a boom in Indonesian aviation, was debt-ridden even before the pandemic struck. An earlier deal to resuscitate its fortunes by linking with another airline group fizzled, even if Sriwijaya had never suffered a crash that resulted in fatalities on board.

“Crew morale is low due to pay cuts caused by the pandemic, and with low monthly hours, concerns about the crew’s performance may be warranted,” Mr. Soejatman said.

Before the pandemic, Indonesians pilots, especially those with low-cost carriers like Lion Air, said they had been pressured to fly planes they considered to be unsafe. Complaints about overwork and underpayment were common, as were accusations that regulatory oversight had thinned in a pell-mell effort to get planes into the air.

And in 2018, a Lion Air 737 Max nose-dived into the Java Sea after its Boeing-designed antistall system malfunctioned. Months later, another 737 Max outfitted with the same antistall software crashed in Ethiopia, prompting the entire Max fleet worldwide to be grounded until late last year.

The Sriwijaya plane that crashed on Saturday was not a Max, nor was it equipped with the problematic antistall software.

Pilots who knew Captain Afwan, 54, who like many Indonesians is known by one name, said that he was no daredevil. His nephew, Mohammad Akbar, said he had been flying for more than three decades.

“Captain Afwan was a very experienced pilot,” said Koko Indra Perdana, a pilot for Lion Air who used to fly with Sriwijaya. “I believe in his skills.”

The model that Captain Afwan flew, the 737-500 series, is considered a time-tested workhorse without glaring systemic flaws. Still, the jet that crashed on Saturday was 26 years old, an age that requires regular maintenance to keep the aircraft in prime flying form, aviation analysts said. And monsoon downpours had delayed the flight on Saturday.

Sriwijaya has been flying only about a quarter of its fleet during the pandemic, industry insiders said. Regulators have warned that some of Boeing’s 737 models may need to be checked for possible air-valve corrosion if not flown weekly.

“We don’t know the condition of the planes after being grounded for months,” Captain Koko said.

Mr. Mohammad, Captain Afwan’s nephew, said his family had not received any definitive news about the flight’s fate. He described his uncle as his “role model,” who was “always smiling.”

Captain Afwan had been joined in the cockpit by co-pilot Diego Mamahit, who had worked for Sriwijaya as a senior first officer for nearly six years, according to his LinkedIn profile. (The carrier has released no public details about the flight crew or the plane, apart from saying the Boeing jet was in “good condition.”)

“I really love to fly and enjoy my duties to operate Boeing 737 aircraft on all domestic routes in Indonesia,” Mr. Mamahit wrote on LinkedIn. “I’ve also seen many beautiful cities and breathtaking views in many Indonesian islands.”

How to move country during a plague: Stories from migrants on starting their lives again in the pandemic

The Battle Lines Are Forming in Biden’s Climate Push