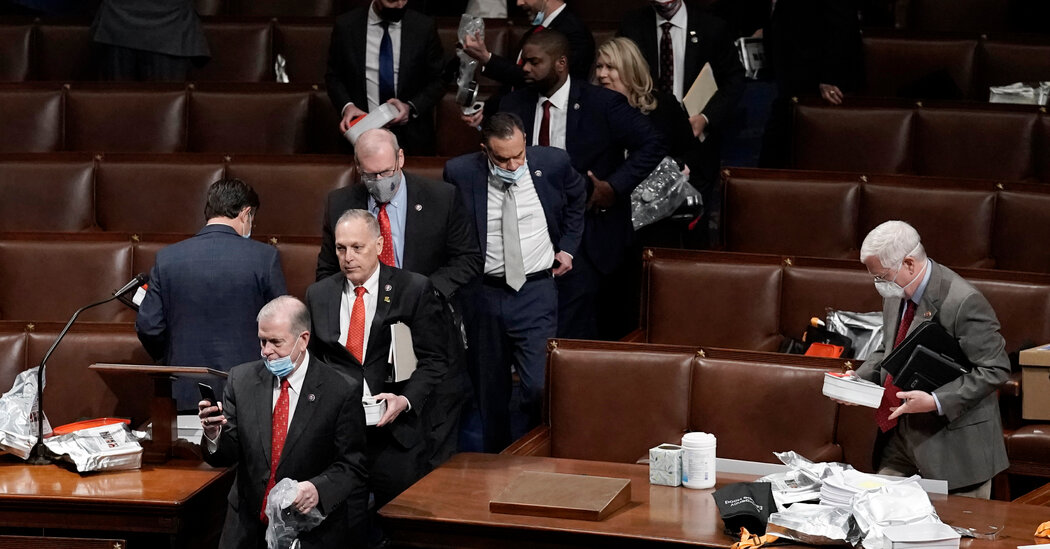 While sheltering in a secure location as a mob of Trump supporters stormed the Capitol on Wednesday, House lawmakers may have been exposed to someone who was infected with the coronavirus, Congress’s Office of the Attending Physician said on Sunday.

In an email sent to lawmakers, Dr. Brian P. Monahan, the attending physician, said that while “the time in this room was several hours for some and briefer for others,” during that period, “individuals may have been exposed to another occupant with coronavirus infection.” He told lawmakers to obtain a P.C.R. test as a precaution and continue taking preventive steps against the spread of the virus.

Congress has long struggled to stem the spread of the virus within its ranks, with mixed guidance and a delayed testing regimen. Dozens of lawmakers, staff members and reporters took shelter in the secure room on Wednesday, but a handful of Republicans refused to wear masks, one person there said, even as Representative Lisa Blunt Rochester, Democrat of Delaware, tried to pass out masks.

Before the mob breached the Capitol, Speaker Nancy Pelosi of California, overseeing the certification of President-elect Joseph R. Biden Jr.’s victory and debate over a Republican effort to subvert those results in certain states, admonished Republicans for having too many people on the floor and for some objectors refusing to wear masks as they spoke.

As the 117th Congress reconvened a week ago, multiple lawmakers tested positive for the coronavirus after taking their oath. Late Wednesday, one Republican, Representative Jake LaTurner of Kansas, received positive test results after voting on the House floor to overturn Arizona’s results and did not return for a second vote early Thursday. It was unclear where Mr. LaTurner was sheltering in place as the mob tried to break into the House chamber, but in a statement issued shortly before 3 a.m. on Thursday, his office said he was not experiencing symptoms.

Because lawmakers qualified for early access to the coronavirus vaccine, many have received at least one shot of a two-dose vaccine, with some receiving both doses. Some congressional aides have been authorized to receive the two-dose vaccine.

Here are the Games Coming Exclusively to Xbox in 2021

Talking Point: What Are You Playing This Weekend? (March 6th)

Random: Zelda x Beavis And Butt-Head Is A Mash-Up That Works Better Than You’d Think