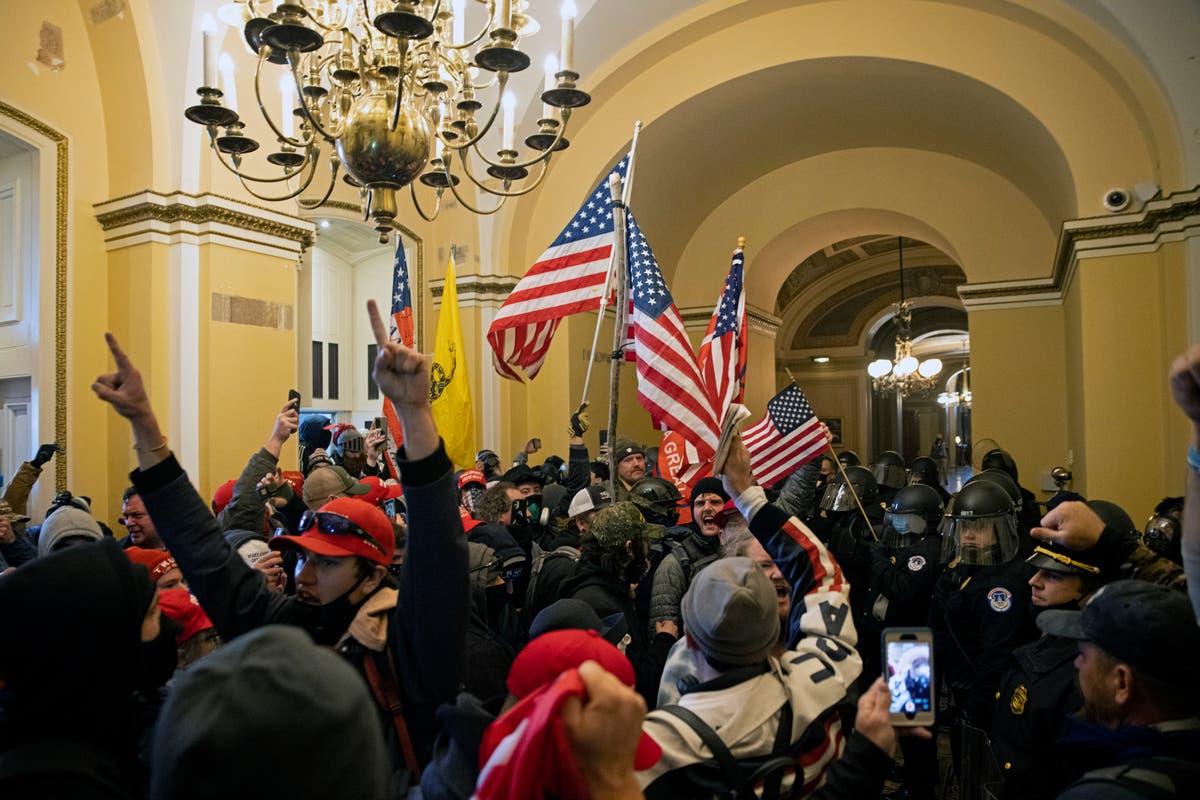 An affidavit filed against Capitol rioter Daniel Egtvedt shows that he fought an entire room of police, was removed from the scene then returned and injured officers a second time, left once more and returned a third time to fight with police yet again – and still wasn’t arrested that day.

Social media screenshots show that Mr Egtvedt believed in the lie pushed by Mr Trump that the election was stolen.

An arrest log from Garrett County in western Maryland shows that Mr Egtvedt was later arrested but also released on 13 February.

According to the affidavit, which is in support of a criminal complaint, Mr Egtvedt tried to walk further into the Capitol building “in the direction of the Rotunda,” when he was stopped by law enforcement who ordered him to leave the area.

Mr Egtvedt took part in a live stream by alt-right troll “Baked Alaska” during the riot, in which Mr Egtvedt said: “Everyone that’s outside, tell them to get in here now,” adding that they “shot me in the eyes twice,” also saying that “everybody, if you’re seeing this, come down here now. We’re not backing away, this is our house.”

Mr Egtvedt ended his live stream appearance by yelling that members of Congress should “grow a spine or f****** resign”.

One officer described Mr Egtvedt as “generally non-compliant, screaming, and incoherent,” and added that he was yelling “at the top of his lungs”.

Mr Egtvedt “resisted and violently flailed his arms at officers as they attempted to subdue him”. Five officers tried to hold him back as Mr Egtvedt tried to charge at one of the law enforcement officials. One MPD officer then tried to grab Mr Egtvedt to stop him from going forward.

As officers tried to push him away from one of the law enforcement officials, another official fell against a column, injuring his right shoulder. After he hit the column, Mr Egtvedt “appeared to grab at his neck,” the affidavit says.

One officer had to hold on “for dear life” due to Mr Egtvedt size as officers tried to physically get him out of the building.

Mr Egtvedt was finally “walked down an exterior ramp outside of the south entrance door,” where he spent several minutes pacing back and forth and yelling at law enforcement.

He was removed from the building at around 3.14pm after first being observed on Capitol grounds at 2.47pm, according to the affidavit.

Coinbase Mentions Cardano (ADA) As One of the Biggest Crypto

U.S. Vaccine Supply: What to Know