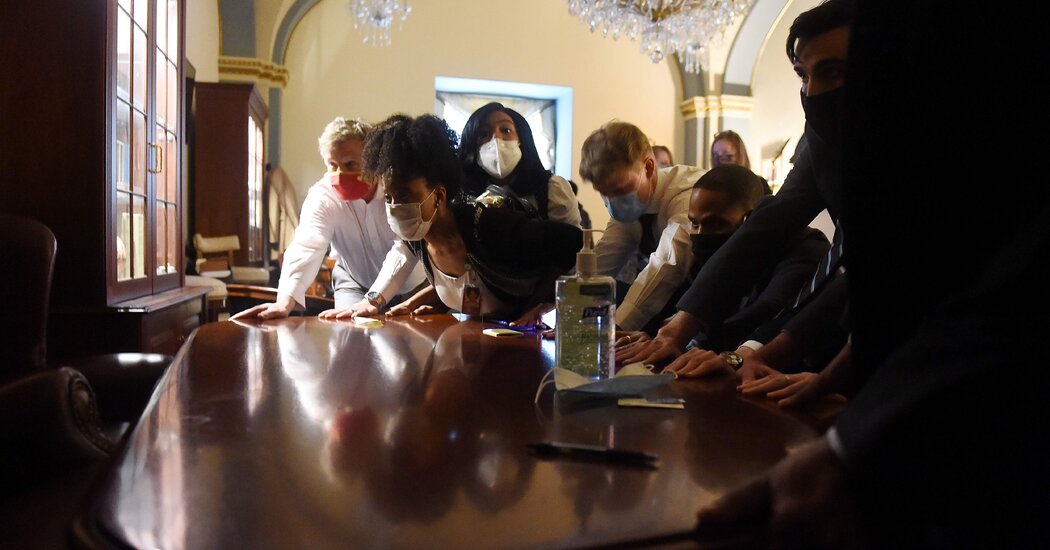 WASHINGTON — Some huddled in corners of the U.S. Capitol, texting loved ones. Others were glued to their televisions at home as their place of work was overrun by rioters who smashed windows, ravaged offices and tore down American flags, shocking the country.

For many congressional staff members and Capitol workers, in particular people of color, the damage wrought on Wednesday was visceral. It will be a long time before they feel safe again at work, they say, knowing that a building once thought to be among the most secure in Washington could be breached by a mob carrying, among other things, a Confederate flag and displaying anti-Semitic iconography.

“They came into our house with the worst of intentions,” said Tré Easton, a legislative assistant to Senator Patty Murray, Democrat of Washington. “You add, on top of that, this open bigotry in what are supposed to be hallowed halls? I don’t know if I can feel safe, just knowing that this is possible.”

The Capitol Police have come under fire for seeming, at times, to offer little resistance to the pro- Trump mob. While some experts defended their actions as prioritizing the protection of lawmakers over the securing of the building, many congressional staff members, along with custodial and food service workers, were left wondering whether they were safe.

Noting that he is an Army veteran, Mr. Purdy, who is Black, said prioritizing people above all was understandable. But he said that it was hard to reconcile that stance with the destruction his colleagues witnessed in person and that he watched play out on television.

“I don’t think I’ve fully processed it all yet,” he said.

Some food service and custodial workers feel even more vulnerable. Rickie Toon, a cook who works in the Capitol but was at home on Wednesday, said he knew colleagues who had been caught in the violence and sprayed with tear gas.

“I have always felt they never did have enough security,” said Mr. Toon, who is Black. But he said the evacuation response had been handled better than it was on Sept. 11, 2001, when, he said, the police did not even inform kitchen workers of the terrorist threat to the Capitol, let alone evacuate them.

Many say they have always recognized the risks of working at the Capitol. Before the coronavirus pandemic, the grounds regularly hosted protests. Even bomb threats were commonplace. But Wednesday’s siege came as a shock.

“When you’re a staffer, you know when something like that happens, you’re not going to be the priority,” said Nicole Tisdale, a Black consultant who spent 10 years working for Democratic and Republican lawmakers before leaving to help train congressional staff members and advocacy groups. “I had never felt insecure in the Capitol itself. But now all of this feels like it’s been security theater.”

Black staff members in particular said the rampage had reminded them of the struggles they had often had to come to terms with in order to work for Congress.

“I’m a gay, Black guy from rural Georgia — and it’s a thumb in the nose of some that I get to work in this place,” Mr. Easton said. He noted that he worked in an office building named for Senator Richard B. Russell Jr. of Georgia, who was a strident supporter of racial segregation and white nationalism.

“But the images of hatred and violence were especially raw and resonant for me,” said Mr. Easton, who watched the destruction unfold while working from home. “That’s something staffers of color especially have felt, when there are just a few of us in this place, relatively speaking.”

One senior African-American Democratic aide spent nearly six hours locked down in the Rayburn House Office Building. Having worked in Congress for 14 years, she said, witnessing law enforcement officials’ lackluster response to the mob in comparison to how she had seen people of color treated was the final straw.

“I am planning to leave,” said the woman, who spoke on the condition of anonymity as she didn’t have permission to speak to the news media. “I’m exhausted from this battle. Wednesday was like a nail in the coffin.”

Another Democratic aide said he had been disturbed by a moment amid the violence on Wednesday when he saw a few white colleagues, ties loosened and looking unstressed, walking around the Rayburn building with red plastic cups.

“They were acting like this was normal,” said the man, who is Asian-American.

Ms. Tisdale, who works on national security policy, said she and some of her colleagues at the Capitol had viewed the event as a terrorist attack. But she said they had been left disappointed by the lack of public sympathy for people in the Capitol who had been caught up in the violence.

“I know how law enforcement responds after a terror attack and after a mass shooting, and I know how the public responds,” Ms. Tisdale said. “That’s not what has happened here. Because all of these people work on the Hill, people are fighting about the politics.”

Representative Andy Kim, a New Jersey Democrat, saw a certain arrogance in what the rioters did. “When people storm in — literally break down the door of America and desecrate this temple of our democracy and this flag — it shows that they think they’re bigger than this country,” he said. “They think they’re better than our institutions.”

“Whoever bought it, bought it for the purpose of this event, which scared me tremendously,” Mr. Kim said of a military-grade vest he found, his voice choking over the phone as he spoke through tears.

One Black congressional staff member who also took a walk through the Capitol to survey the aftermath on Wednesday night said that despite all the damage, he had been stopped in his tracks outside Representative Steny Hoyer’s office, where a poster honoring John Lewis, the congressman and civil rights leader who died in August, had been displayed. It was missing.

He looked for it feverishly and found only a broken piece on the ground next to a trash can. The image of Mr. Lewis was gone. All that remained of his celebrated quote, “Get into good trouble, necessary trouble,” were the final two words — smudged by a boot print.

“That portrait was draped in black cloth,” he said. “They destroyed it.”