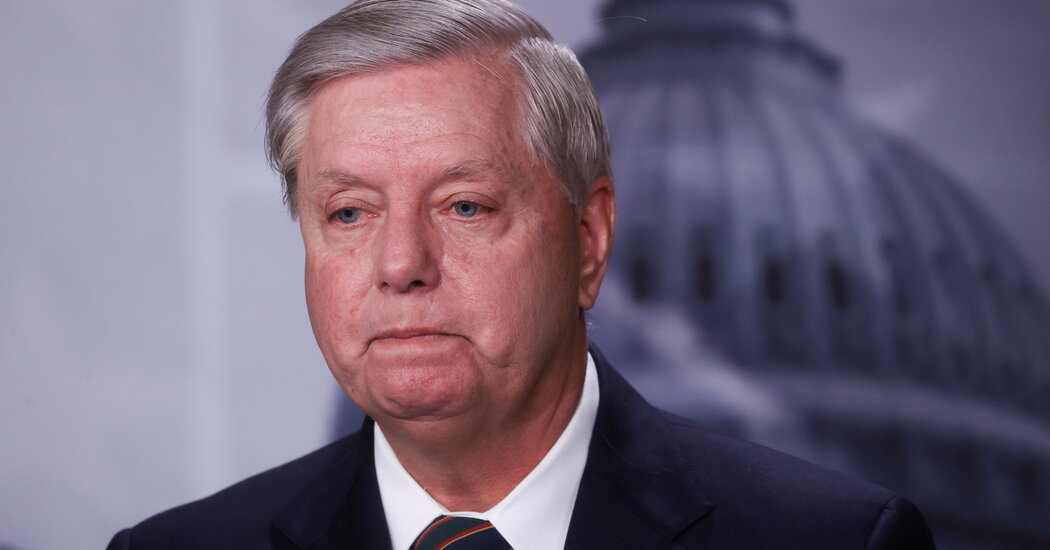 Hi. Welcome to On Politics, your wrap-up of the week in national politics. I’m Lisa Lerer, your host.

Sign up here to get On Politics in your inbox every weekday.

With less than two weeks left in the Trump administration, a number of Republicans are experiencing some last-minute revelations about the president’s character, inflammatory rhetoric and polarizing leadership of the country.

“All I can say is, count me out. Enough is enough. I’ve tried to be helpful,” said Senator Lindsey Graham of South Carolina, one of President Trump’s strongest allies, who once promised “earth-shattering” revelations of voter fraud that he falsely argued had cost Mr. Trump the election. Now, after the violent breach of the Capitol this past week, Mr. Graham is refusing to rule out using the 25th Amendment to strip his former friend of his presidential powers.

Mr. Graham is far from alone in scurrying away from all the praise he’s lavished on the president over the past four years. As a shaken Washington recovered from the violent attack on the Capitol, Republicans embraced the traditional tools of political self-preservation, offering resignations and strongly worded letters, anonymously sourced accounts of shouting matches and after-the-fact public condemnations.

Administration officials anonymously spread the word, through Axios, that they would defy any requests from Mr. Trump that “they believe would put the nation at risk or break the law,” raising the obvious question of whether they would have carried out illegal or dangerous orders over the past four years.

Transportation Secretary Elaine Chao and Education Secretary Betsy DeVos quit their posts, saying they were “deeply troubled” by the president’s handling of the riot. Ms. Chao, it’s worth noting, stood next to Mr. Trump at the 2017 news conference where he insisted that “both sides” deserved blame after white supremacists incited deadly violence in Charlottesville, Va.

At least seven lower-ranking members of the Trump administration also resigned, while many more fretted that they would be unemployable.

“Now it will always be, ‘Oh yeah, you work for the guy who tried to overtake the government,’” said Mick Mulvaney, the president’s former acting chief of staff who resigned Wednesday as special envoy to Northern Ireland.

Mr. Mulvaney’s journey with the president highlights one of the most striking features of the ongoing Republican revisionism. Many in the G.O.P. warned publicly during the 2016 campaign that Mr. Trump was fomenting exactly the kind of violence that the country witnessed on Wednesday — concerns that were quickly set aside once he took office.

Of course, some Republican officials may be truly horrified by Mr. Trump’s egging on of his supporters on Wednesday and his refusal to take immediate action to stop a violent takeover of the Capitol. Many of those same Republicans frequently offered private condemnations of his actions throughout his presidency — objections they studiously kept off the record.

But with less than 275 hours left in the Trump presidency, it’s hard not to see the political posturing embedded in their now-public condemnations.

Many inside and outside Washington are setting their sights on the new political reality to come with a Democratic-controlled government. After years of declining to police Mr. Trump’s falsehood-filled and threatening social media posts, Twitter on Friday permanently suspended his @realDonaldTrump account “due to the risk of further incitement of violence.” Mark Zuckerberg had earlier barred the president from Facebook and Instagram through at least the end of his term.

Many of Mr. Zuckerberg’s employees noted that Democrats had secured control of the Senate before he took the action.

But at this point, it’s an open question whether any powerful Republicans will pay a serious price for their implicit or explicit support of Mr. Trump’s inflammatory rhetoric and dalliances with violence. So far, the penalties seem to be measured mostly in bad media coverage.

Senator Josh Hawley of Missouri, who championed efforts to overturn the results of the presidential election, was publicly disowned by his political mentor, disavowed by some of his donors and dropped by his book publisher — a move he blamed on a “woke mob.”

Other elected Republicans were condemned by their hometown newspapers in scathing editorials. Cracks even emerged in Rupert Murdoch’s media empire as The Wall Street Journal’s editorial page, which has been a regular Trump cheerleader for years, called on the president to resign.

Meanwhile, Democrats are pressing for resignations and permanent bans from the public sector for Trump aides, supporters and allies. Many would like to see criminal prosecutions once President-elect Joe Biden takes office. Some are even pushing to rid the federal government of all political appointees and civil servants who supported Mr. Trump.

It’s unclear whether Mr. Biden will back such efforts. Tough investigations into the previous administration could complicate his campaign promise to unite the country and his ability to get Republican support for his legislative goals. On Friday, he avoided expressing views on specific punitive actions, saying that he’d leave those judgments to his Justice Department and that voters should determine the future of politicians like Mr. Hawley and Senator Ted Cruz of Texas, another Trump ally who backed the effort to overturn the election results.

For all the Republicans attempting to distance themselves from the president, 147 of them still voted to reject the results even after the siege of the Capitol. Since then, a segment of the party has embarked upon an effort to reshape reality, downplaying the violence and suggesting that far-left activists had infiltrated the crowd and posed as fans of the president.

This is obviously ridiculous: The rioters discussed plans to invade the Capitol for weeks in public social media posts. And Mr. Trump didn’t blame antifa for the rampage — instead, he told the mob, “We love you.” Still, those claims will echo through right-wing media, major news sources for the large number of activists and voters who remain loyal to Mr. Trump.

Some Republicans may be trying to jump off the Trump train at the final station. But they’ve already spent years helping fuel the engine.

Were you forwarded this newsletter? Sign up here to get it delivered to your inbox.

Thanks for reading. On Politics is your guide to the political news cycle, delivering clarity from the chaos.

Is there anything you think we’re missing? Anything you want to see more of? We’d love to hear from you. Email us at onpolitics@nytimes.com.

After Elon Musk, here are the top 9 richest people in the world

Confederate Battle Flag in the Capitol: A ‘Jarring’ First in U.S. History

Scientists Have Induced Hallucination-Like States in Mice to Study Psychosis