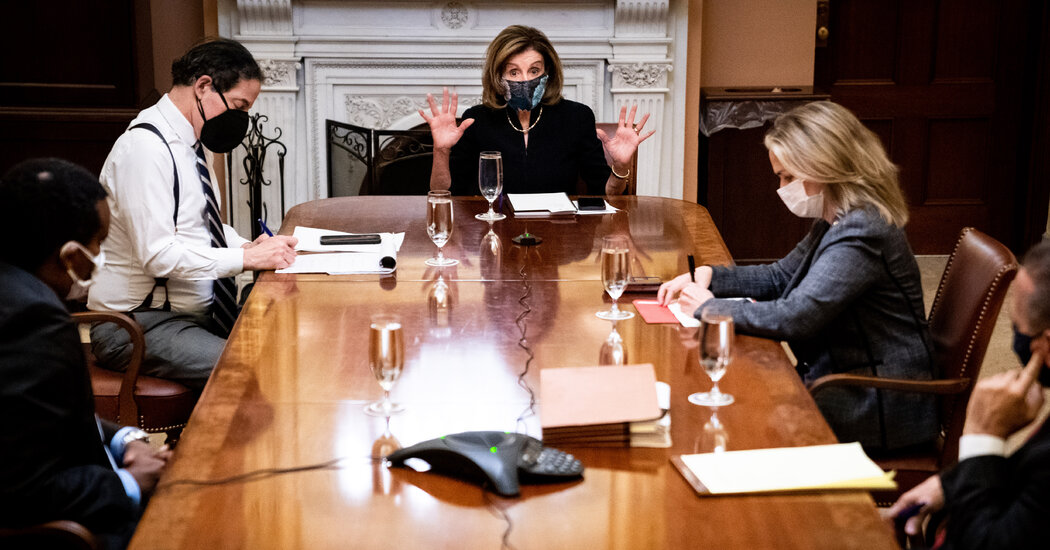 The House is poised to deliver to the Senate on Monday its article of impeachment charging former President Donald J. Trump with “incitement of insurrection,” formally advancing the process even as the trial itself has been delayed.

At 7 p.m., the House impeachment managers will march the charge across the Capitol. That is the official, if ceremonial, start of the Senate trial process, during which the managers are expected to make their case that Mr. Trump should be held accountable for his role in inciting the deadly assault on the Capitol on Jan. 6. Representative Jamie Raskin, Democrat of Maryland and the lead impeachment manager, will read the article on the Senate floor.

Senate leaders last week struck a deal to pause the trial until the week of Feb. 8 to give the prosecution and the defense time to draft and exchange legal briefs, a timetable that also allows President Biden time to install members of his cabinet. Senators will be sworn in as jurors on Tuesday.

“During that period, the Senate will continue to do other business for the American people, such as cabinet nominations and the Covid relief bill, which would provide relief for millions of Americans who are suffering during this pandemic,” said Senator Chuck Schumer of New York, the majority leader.

The looming trial has already sent lawmakers burrowing into dueling positions, deepening the schisms in an already divided Senate. As some Republicans in the chamber, including Mitch McConnell of Kentucky, the minority leader, have grown increasingly worried that failing to distance themselves from Mr. Trump could damage the party for years to come, others have made clear that they oppose even the idea of a trial and will try to dismiss the charge before it begins.

In a Monmouth University poll released on Monday, 52 percent of Americans said they wanted the Senate to convict Mr. Trump, compared with 44 percent who did not. But the poll found overwhelming opposition among Republicans, with only 11 percent saying they wanted him to be convicted and 85 percent opposing it.

Impeachment managers have signaled that they intend to present a straightforward case focused on the storming of the Capitol, which played out in public view and left many of the senators who will serve as jurors in the trial cowering for safety. Representative Madeleine Dean, Democrat of Pennsylvania and one of the impeachment managers, said on Sunday that she expected the trial to “go faster” than Mr. Trump’s first impeachment trial in 2020, which lasted 21 days.

“Some people would like us to turn the page: ‘Oh, let’s move on,’” Ms. Dean said on CNN’s “State of the Union.” “We must remember, I believe, that this impeachment trial, I hope conviction, ultimate disqualification, are the very first powerful steps toward unity.”

In Washington, Policy Revolves Around Joe Manchin. He Likes It That Way.